The sixth annual Portland Winter Light Festival, designed to bring a spark of joy at a dark time, felt especially apt this year. Traditionally centered around OMSI and the Eastbank Esplanade, this year saw the festival branching out into other areas of the city as a pop-up installation in order to avoid crowd gathering to view the displays.

Luma, a longtime contributor the festival, used the downtown construction block of the PAE Living Building as their installation site. The ZGF-designed project will open later this year as the largest developer-driven Living Building in Portland, and a shining example of advanced engineering and sustainable design.

Luma’s lighting installation uses the theme of a beacon shining out to the world from the “lighthouse” of the Living Building construction site, which proves that a design as advanced as this is not only achievable but financially viable. “It’s as if our lighthouse is sending out a signal from Portland to the world calling everyone in all industries--architects, designers, contractors, developers, building owners to get excited about Living Buildings and implement these ideas in their own projects,” Project Manager Gabrielle Serriere notes. It’s a hopeful message that celebrates the exciting upcoming building that so perfectly embodies PAE and Luma’s vision to help solve the planet’s water and energy challenges. “This project hits so close to home for PAE and Luma, and is one of our biggest opportunities to show the world who we are and what we believe in. The fact that we get to share that in Portland by way of an innovative piece of architecture is profound for us as a company right now.”

The installation uses high-end production and event lights donated on loan by SGM Lighting. The stationary lights, seven P-10 and Q-10 fixtures, are fully customizable and programmable RGBW spectrum color-changing LED lights. The Q-10 has a 110-degree beamspread, which creates a wide distributed beam of light. One of these occurred on each CLT floor from 2-5 of the building shell at the construction site, pointing up so the wide beam could be seen on the ceiling from street level. The P-10 has a much narrower beam at only 10 degrees. These narrow beams act as the “lighthouse” fixtures, directed along various angles, of each level, pointing out from the facade so they graze the exterior elements including some nearby tall trees. As people are walking down the street these lights act as a beacon, drawing visitors down the road or around the corner.

The design process took about four weeks, with the installation and setup taking three nights before the festival began. Lighting Designer Shea Sterner programmed the custom controls system to the sequence of lights with the team’s artistic input. As the viewer walks by the building, the color of the lights changes in waves, glowing in the night sky through gradients and various patterns.

“Our process was to think about how this building is like a pebble in a pond,” says Gabrielle. “We want to magnify the ripple effect of that pebble to reach as many people as we can. We’re excited about spreading our knowledge and passion across the earth as far as possible, through what the Living Building certification can teach us all. “ 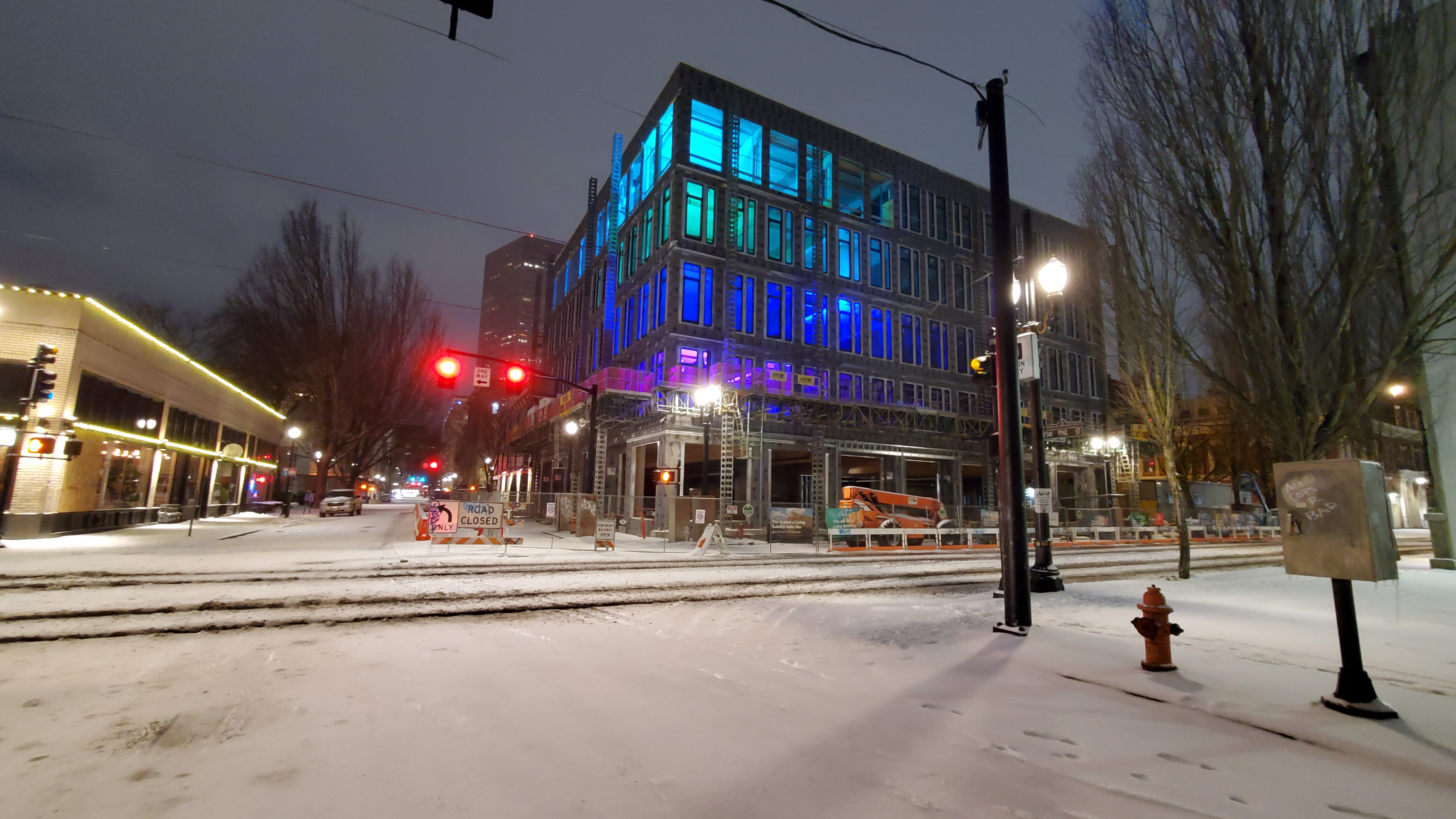 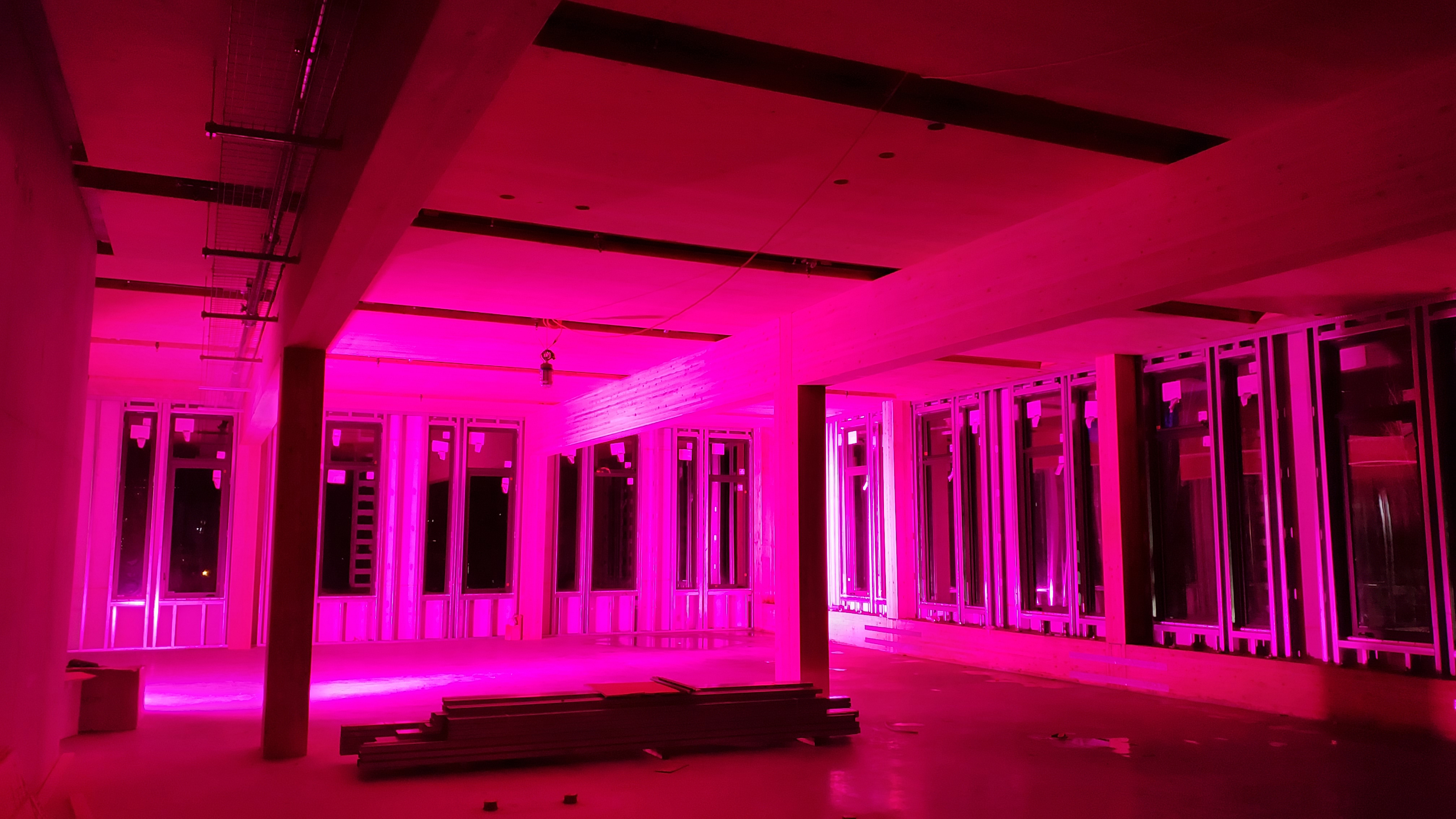 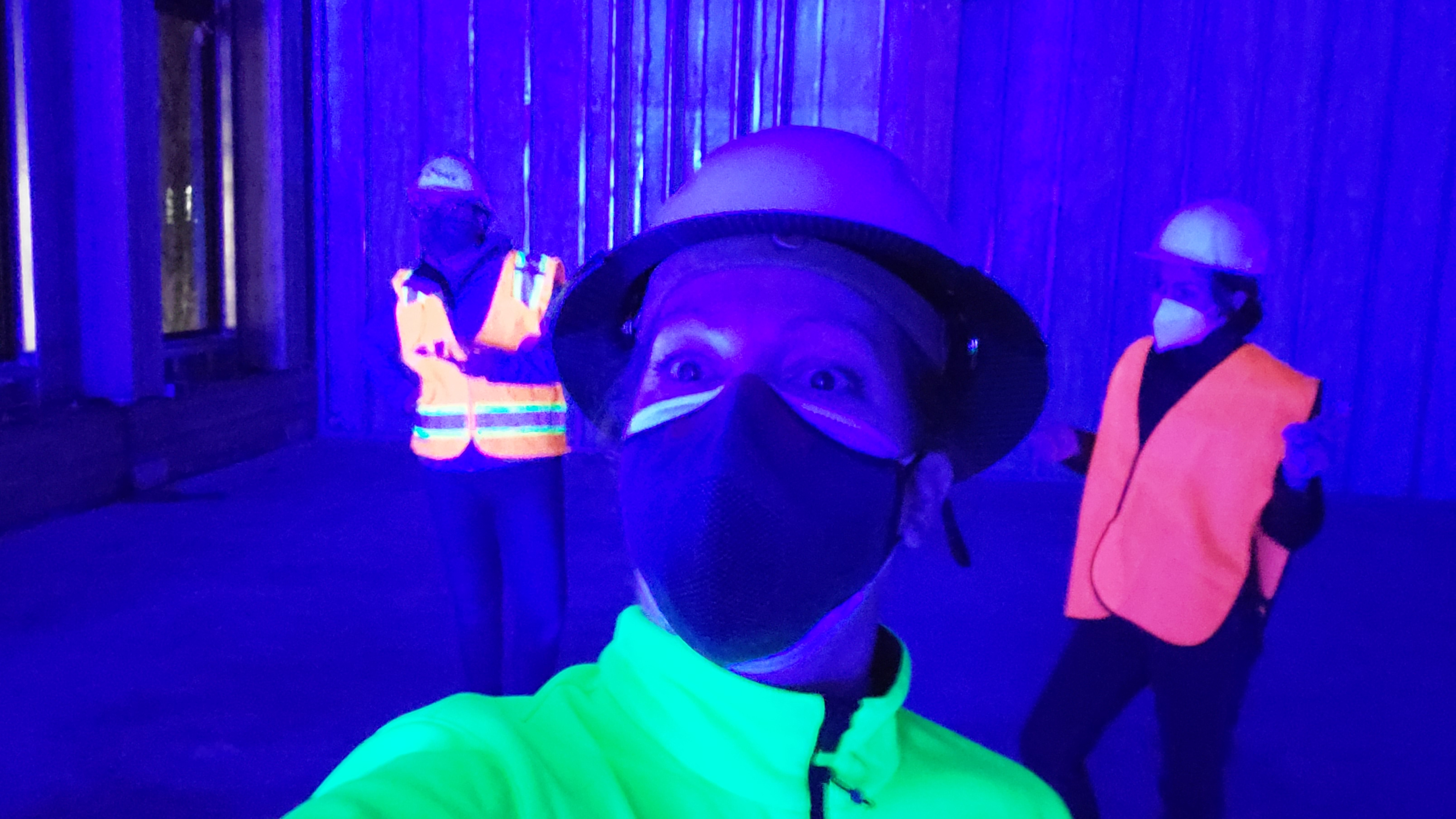 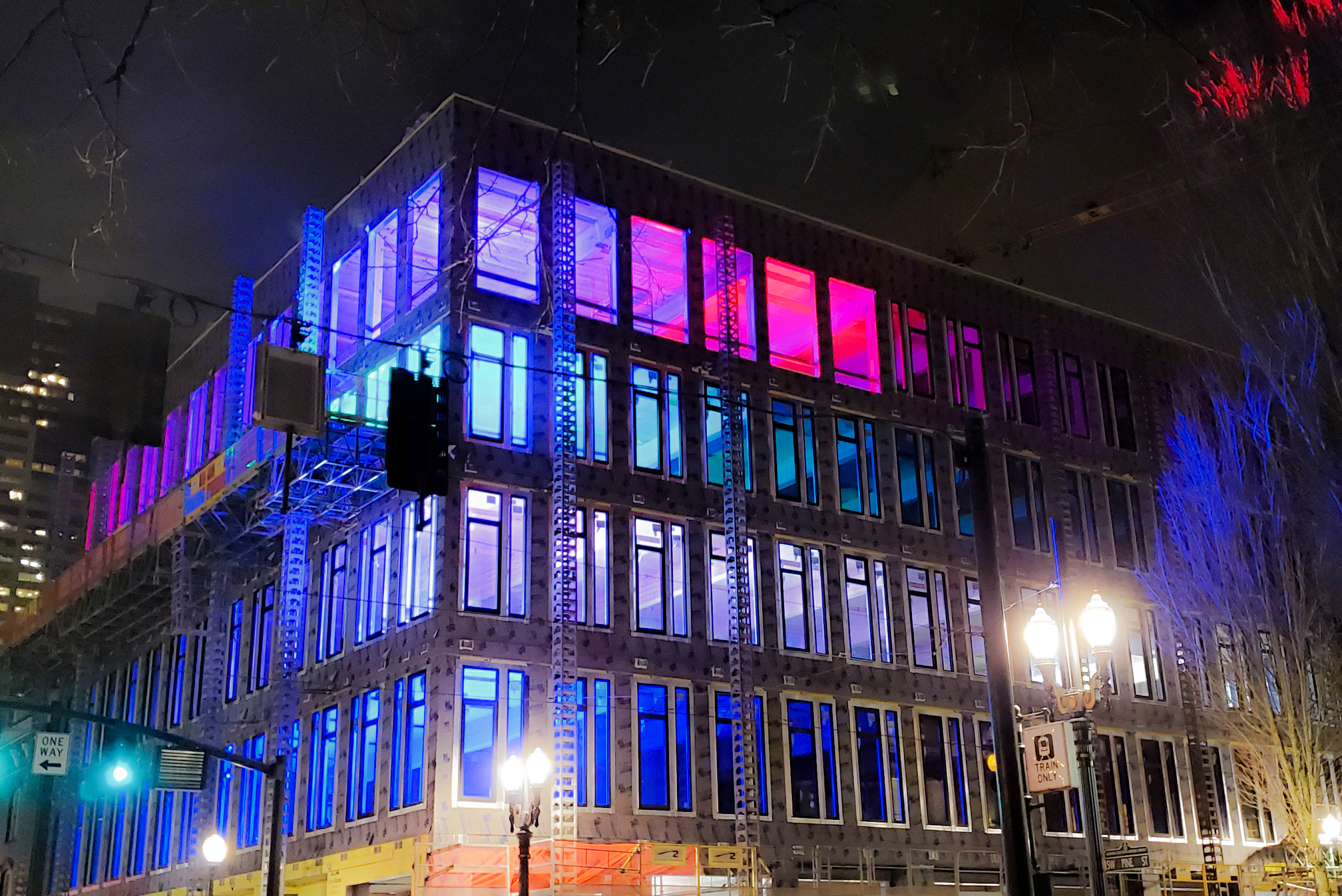 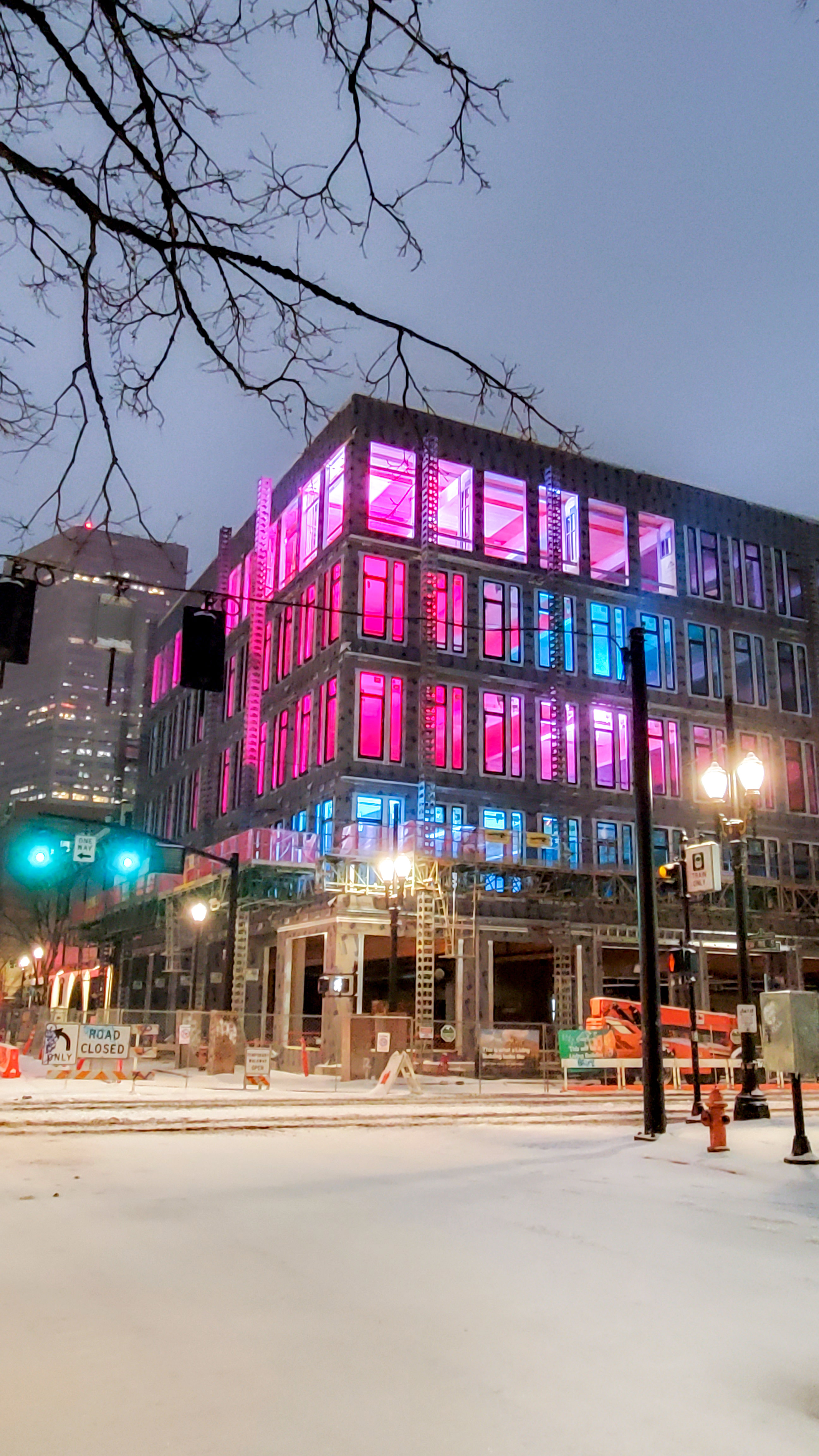