This year was the fifth annual Portland Winter Light Festival, which attracts up to 150,000 people over three days to the banks of the Willamette River in the cold and dark days of February. This year’s theme was Into the Dreamscape.

For their contribution, Luma partnered with Walker Macy and R&H Construction to design an immersive experience that uses light and reflection to mimic the four stages of sleep. The concept was called REM.

A little about sleep cycles and Luma’s inspiration: A normal sleep cycle goes through four stages as recorded through brainwaves on an EEG reading. Stage 1 is the lightest sleep as you’re just drifting off. Stage 2 is characterized by brain activity called sleep spindles: sudden bursts of brain activity that help process long term memory, named for how they look on an EEG. Stage 3 is deep sleep, characterized by long, slow waves. After this stage, a person will pass quickly back through Stages 1 and 2 before settling into the REM (rapid eye movement) cycle where the body is completely relaxed, but the brain and eye show fast, frantic movements. This is often when we have our most vivid dreams. The entire cycle repeats four to five times during a normal night, each time lasting around 90-110 minutes.

The designers mimicked the REM experience by using a geometric dome that visitors could walk inside where they found a reflective corridor around a central tower. The tower and surrounding walls were wrapped with yards and yards of reflective mirror material, donated by Rosco, then layered with multiple sets of lights. Additional materials were also generously donated by ETC and Acclaim Lighting.

The corridor simulated the experience of falling asleep, while the various added lights represented the eye’s movements during the sleep cycle. The dome was sheathed in layers of lights: a layer on the inside walls pointed in and up, while the lantern in the middle contained four individually controlled lighted sides. Four color pixel lights splashed across the ceiling mimicking the cadence of the eye’s fluttering motion in the sleep cycle, and small spot fixtures used strobes and pulses to simulate the frantic motion of the spindle.

Inside the dome, a walk around allowed a glimpse into our dreams. The entire cycle lasted for a full minute, though a short walk still offered a full experience of all the various lights. The few that stayed for the full show could watch the entire sleep cycle play out through lighting changes, including the pixel matrix on the ceiling that had a clear linear timeline. Festival participants watched the lights peak and dip through the four sleep cycles, into dreams, then awake again.

The design took a fast two months to create, a fast two days to build, and an even faster two hours to tear down. On Thursday, opening night, Luma hosted a happy hour nearby at Produce Row for clients and friends, and they walked over to the festival together after celebratory drinks. Friday night saw a torrential downpour and the dome serving as shelter for the crowds, while attendance boomed on Saturday.

Nearby attractions included a shadowbox display, a wooden fire sculpture, and a light circus. At the end of the event, the mirrored material was carefully packaged for a donation to a middle school science class for use in experiments prolonging the life and inspiration of the piece for future dreams. 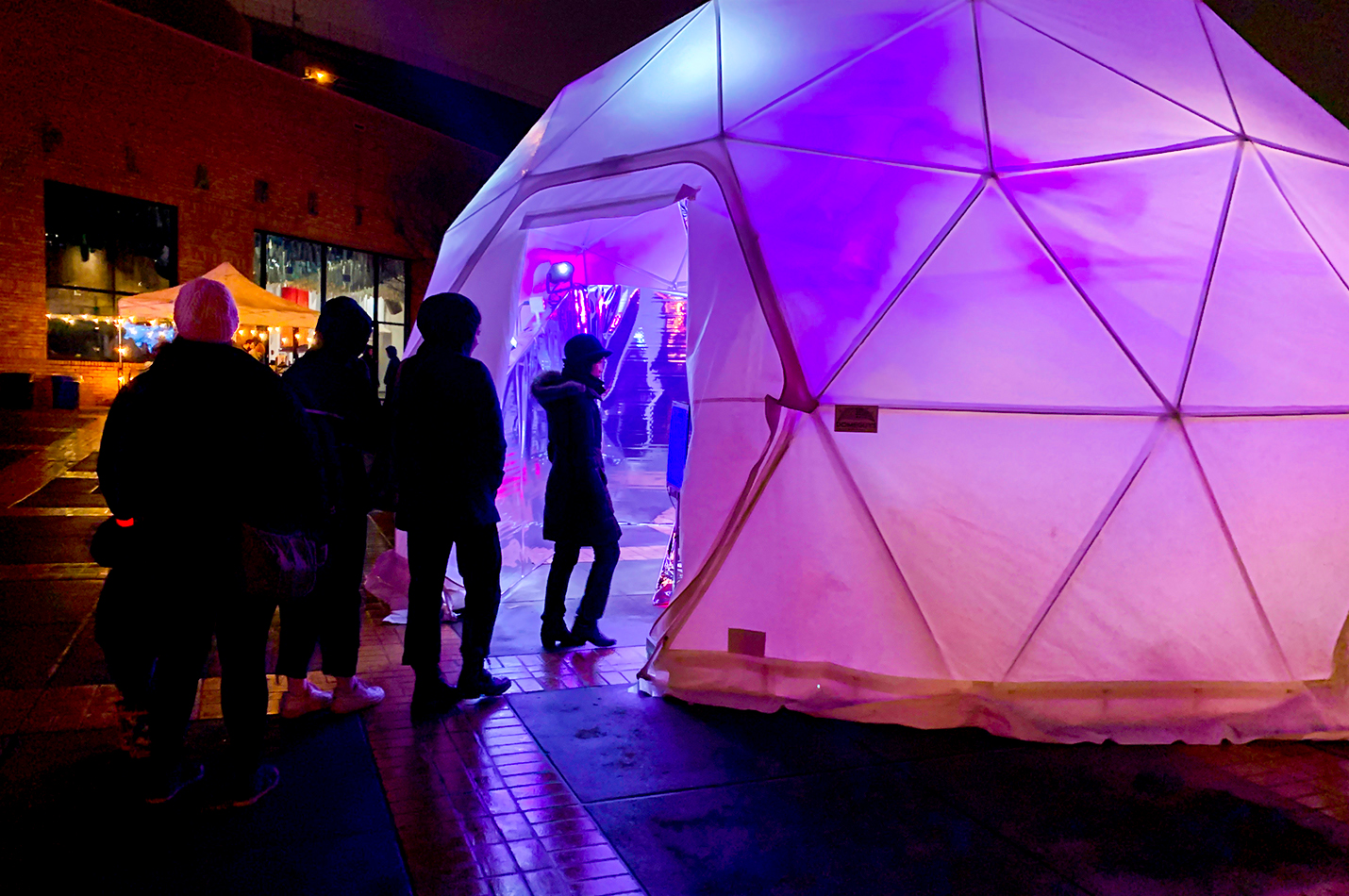 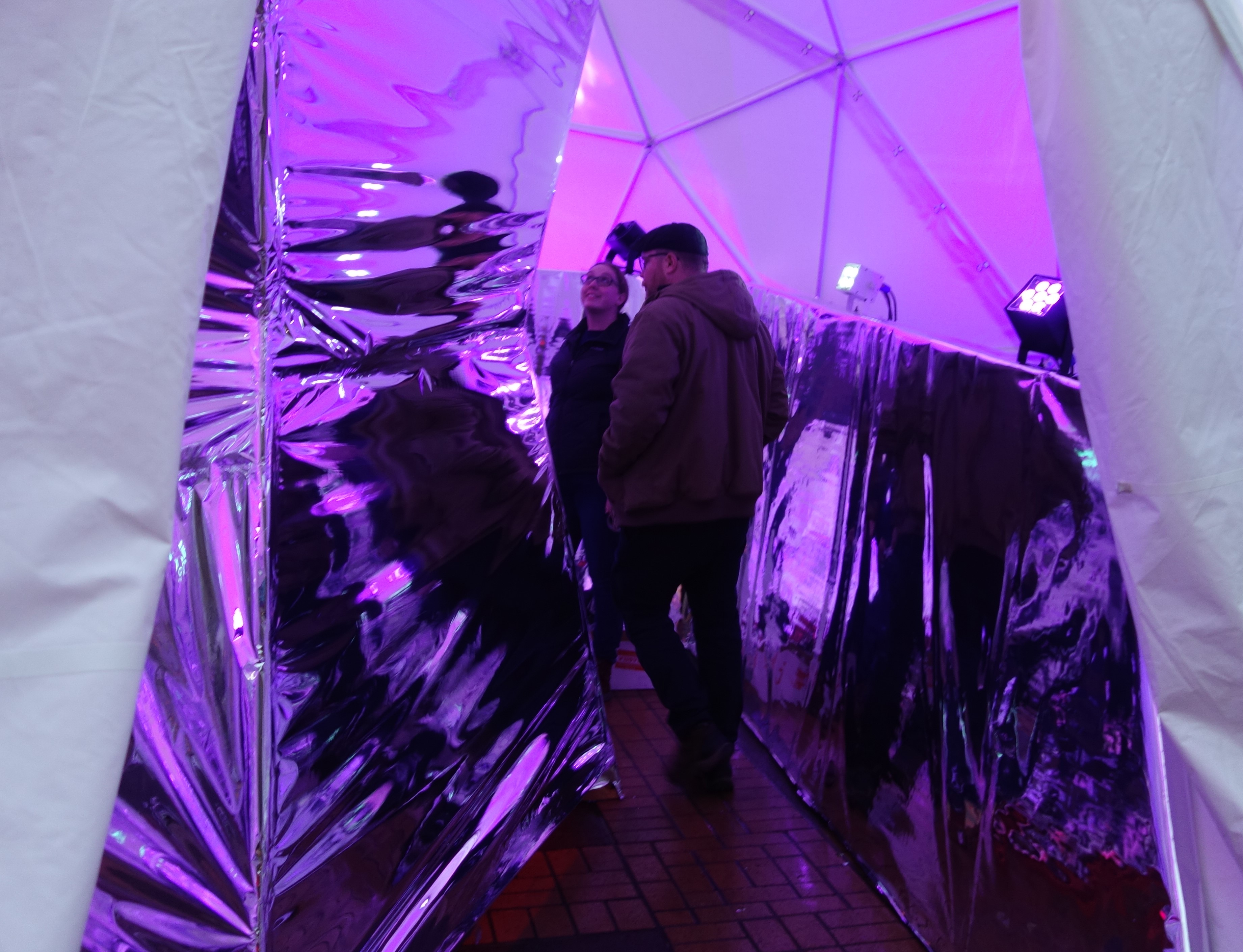